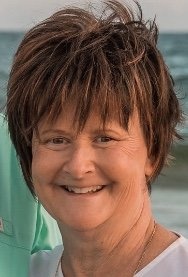 Sharron was born January 8, 1964 to Leon Moody and Minnie (Shurbet) Jennings in Bridgeport. She was married to her husband, Damon Tucker, for 30 years. She was the office manager for Drs. Dan and Debbie Selz for 33 years.

Sharron enjoyed working in the nursery at Grace Fellowship Church. She took several summer mission trips to Galveston. She loved her work and the people she worked with. Sharron also enjoyed working with the youth of the county at the Youth Fair and serving on the board for the Buyers Association. As her children grew up she was a coach and sponsor for cheerleading and soccer. Sharron loved her grandchildren, working in her flower beds, was a big George Strait fan, and loved Dos Chilis. She was also a great cook but didn’t like the kitchen.

Sharron was preceded in death by her mother Minnie Jennings and step-father Larry Jennings; her son Don Tucker; and grandparents Louis Moody and wife Nona, Robert Mayo and wife Geneva, and OB Shurbet.

In lieu of flowers, donations may be made to Feeding Wise Kids at PO Box 534 Bridgeport, Texas 76426.

To order memorial trees or send flowers to the family in memory of Sharron June (Moody) Tucker, please visit our flower store.