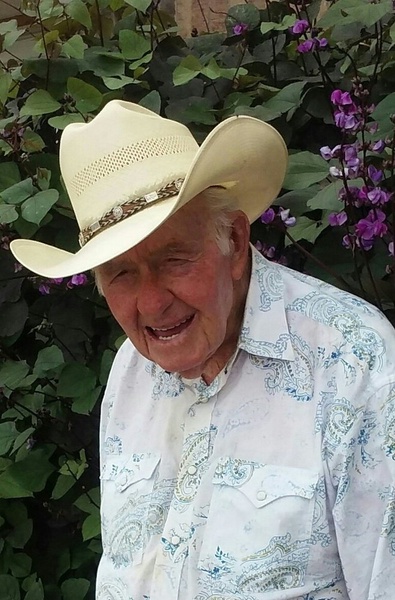 Services for John Alfred Tharp, 96, of Bridgeport, Texas will be 10:00 am Saturday, July 13, 2019 at the United Pentecostal Church in Bridgeport, officiated by Bro. Mike Wiltcher. Burial will follow at Eternal Oaks Cemetery in Runaway Bay, Texas. Pallbearers are Rex Webb, James Johnson, Bill Miles, Chris Ince, Earl Tharp, Chase Caston, Waymon Causey, and Bruce Maxwell. Visitation will be Friday, July 12 from 6-8 pm, also at the church. He passed away Tuesday, July 9 at home.

He was born June 27, 1923 in Bryan, Texas to Leonard Thomas and Pearl Frances (Brisbane) Tharp. As a young man John grew up in Bryan where he received his education.

Following high school graduation John, along with two brothers, joined the United States Navy during World War II. He served his country aboard the USS Calvin Coolidge. He was aboard the ship when it was sunk by mines on October 26, 1942, and often stated that it was the scariest time in his life.

Following the conclusion of World War II John returned to the Bryan and Houston area. He then rejoined the U.S. military, this time with the U.S. Army, and remained in the Army for six years. He was proud to serve his country in two wars and served as a medic in the Korean conflict.

Following his second honorable discharge from the military, John returned to South Texas and worked throughout the area and neighboring states as a farmer and a ranch hand. On July 6, 1984 he was united in marriage to Christine (Daniel) Linnell and the couple established their initial home in Euless, Texas before moving to Boyd, Texas. In 2009, they moved to their current home just south of Bridgeport.

John loved fishing but his favorite thing was tending to his cattle. He also enjoyed his westerns on TV. He was a member of the United Pentecostal Church in Bridgeport.

He was preceded in death by his wife, Christine in October 2016, his parents, and four siblings.

To order memorial trees or send flowers to the family in memory of John Alfred Tharp, please visit our flower store.