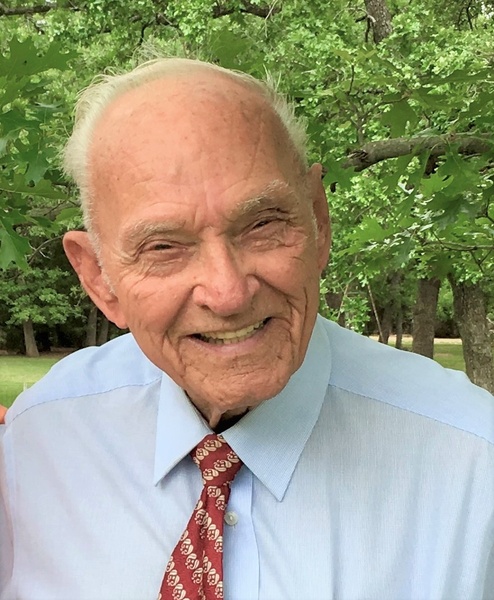 A memorial service for William R. ‘Bill’ Lawrence, Jr., 89, of Springtown, Texas will be Tuesday, February 22, 2022 at 11:00 am at First Baptist Church Springtown, officiated by Dr. Hal Kinkeade. A visitation will precede the service by one hour and begin at 10:00 am, also at the church. Bill passed away Thursday, February 17 in Decatur.

Bill married his high school sweetheart, Cathy, on July 16, 1951, in Hobbs, New Mexico.   He worked in the oil field in the early years and later became a Texas State Trooper with DPS which lead them to Dumas, where they made their home for the next 30 years. During those years, Bill also farmed and worked for Phillips Petroleum until his retirement.  After Cathy’s death in 1996, Bill married Loretta Corbitt. They enjoyed many years of retirement together, playing bridge, golf and dancing, and great grandkids.

Bill had been a resident of Springtown since 2016 and was a member of First Baptist Church.

He was preceded in death by his parents; first wife, Cathy; his brother, Jerry Lawrence; and grandson, Matthew Bryant Ball.  He is survived by his wife, Loretta; daughter Diane Ball and husband Jim;  daughter Brenda Garth and husband Dirk; and son Rick Corbitt and wife Kristen; sister, Janice Ruth; Grandchildren Jim and Kristi Ball and Kristi and Jim Kelly; great-grandchildren Matthew and Kyler Ball, and Kyndall, Avery, and Emery Kelly.

In lieu of flowers, the family requests memorials be made to FBC Springtown, 500 N. Main Street, Springtown, TX 76082.

To order memorial trees or send flowers to the family in memory of Bill Lawrence, please visit our flower store.