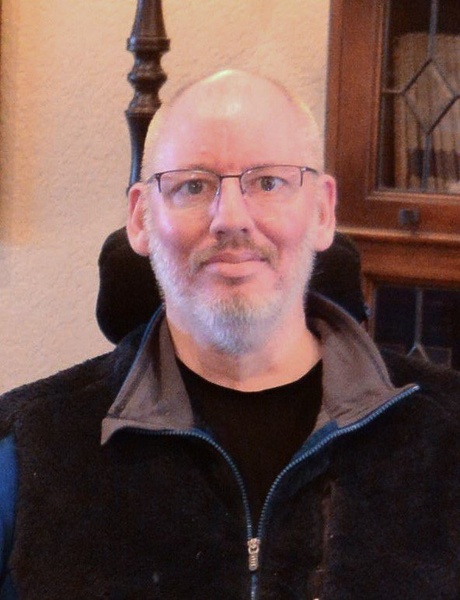 Services for Barry Nelson Hollis, 50, of Decatur, Texas will be 2:00 pm Sunday, January 12, 2020 at the Community Church in Decatur, officiated by Pastor Chris Wann and assisted by Pastor Heath Marion. Visitation will be 6-8 pm Saturday, January 11, also at the church. Barry passed away Sunday, January 5 at his home in Decatur, after longterm complications from muscular dystrophy. He was born April 28, 1969 in Lake Jackson, Texas to Nelson and Laretta (Smith) Hollis. He grew up in Lake Jackson, and after graduating from Sam Houston State University he moved to Oklahoma City and graduated from Oklahoma City University College of Law in 1995 with a law degree. Barry met his wife Leslie Kennedy at Northwest Baptist Church in Oklahoma City and the couple married in December 1994. He was a personable man who treated others with respect and dignity and treated everyone equally, whether a janitor or the CEO of a company. ‘Uncle Barry’ was very significant in the lives of his nieces and nephews, always encouraging them to follow their dreams, and he spent hours creating music playlists for them, as well as spending hours playing video games online with them. His passion was teaching the Bible, and he preached in many settings. Once in Brazil he preached 19 times in 8 days. His face would light up anytime the opportunity presented itself to present the Gospel. He also had a passion for teaching others how to study and interpret the Bible for themselves. Over the last 20 years he gave away more than 200 study Bibles. Barry is survived by his wife of 25 years, Leslie Hollis of Decatur; son Christopher Hollis of Decatur; brother Greg Hollis and wife Cherry of Lake Jackson, and numerous nieces and nephews. He was preceded in death by his parents Nelson and Laretta Hollis. In lieu of flowers donations may be made to Community Church to fulfill their vision for a building facility for Special Needs ministry, PO Box 1058, Decatur, TX 76234, or Oklahoma Baptist Homes for Children, 3800 N May Ave, Oklahoma City, OK 73112.
To order memorial trees or send flowers to the family in memory of Barry Hollis, please visit our flower store.